Mainpage > Artykuły o regionie > When did Zwoleń regained its independence?

When did Zwoleń regained its independence?

Thanks to the fact of recent finding of valuable documents from interwar period – protocols from Zwoleń Community gathering (MRZ/A/328), we are able to try answering the question “What it was like in Zwoleń during last two months of 1918”, which is time for great changes in Poland.

Protocols from October 22nd and 29th 1918, indicate that people of Zwoleń were up to date and reacting to what was happening. They were relating to tax burden which remained in there after Russian authorities (liquidation of 60% addition to land tax), and clean up the legal mess made by occupation authorities, they also imposed new “all trades tax” – so that it won’t burden only those working in agriculture; they were facing with accounting the budget of 1918 (with mayor Jan Zagożdżon) and preparing financial project for the next year; they were planning and electing new municipal clerks (a plenipotentiaries, so there was no need for every entitled people (approximate 200) to come to be convened); they saw a necessity of launching a loan facility for the community, land consolidation (put away for the right times); they were making decisions about sales of wood from local forests in order to help people form the city; appointment of the militia, which officers was about to be armed with melee and firearm. The matter of the melee weapons, especially its financing will bustle around on the future meetings.

6th November 1918 a meeting regarding spreading “anarchy” across the polish lands, abolition of occupation and the fact of no directives from district seym, was ordered. At the time it was decided:

1. to hand on the temporary management to administrative commission which members were: Antoni Kwapisiewicz, Józef Aksamitowski, Jan Zagożdżon, Piotr Mazurkiewicz and doctors – Białowiejski and Józef Stypiński as well as one Orthodox Christian citizen.
2. administrative commission took over the management in every field, and each of the previous authorities lost all of their prerogatives
3. Ludwik Grzybowski and doctor Białowiejski has been elected as members for Kozienice District Commission
4. to organize informational campaign in order to make the situation clear for citizens, and a agitational one with a purpose of creating Polish Armed Forces

In other words, November 6th 1918 was the day, when Zwoleń declared its independence.

1. mayor Antoni Kwapisiewicz became the representative of the community
2. most important decisions were to be made collectively by whole Commission

At the Commission meeting, community’s financial state was checked, which led to decision of transferring the funds for maintaining 7 man garrison, which was at the place (6 crowns daily per man). This fund was to be financed from the money acquired from penalties imposed earlier by Austrian government – executed by the military itself.

They also spoke about building a power station – it was decided to reach out for someone with appropriate information.

11th November 1918 not only because of the dynamically changing situation in the country, but also because the decisions and reactions of district authorities, a meeting was called. 6th November 1918 Kozienice Civil-Labor Council issued an appeal, which 23rd point stated for it to be the representative of its community. Zwoleń Commune chose its delegate and deputy – Ludwik Grzybowski and his deputy Jakub Skowroński. The resolutions of 6th November were deleted and acknowledged as “inappropriately conducted”. However the tax distribution committee was convened, and the city was split in three regions. Members of the committee were: (I) Karol Marchewka and Hipolit Nowakowski, (II) Marcin Kornakowski and Antoni Stypiński, (III) Józef Aksamitowski and Andrzej Szewczyk (Antoni’s son).

Supportive work for a small homeland

6th December 1918 a necessary meeting was called – “in view of the hard time everyone is going through”. 140 people appeared (204 had the right to vote). Auditing of accounts of mayor Jan Zagożdżon, and the matter of post-hospital land lease by Piotr Mazurkiewicz who was not fulfilling the contract were carried out. “In view of hard historical conditions” it was decided to appoint supervisory and audit committee consisting of 6 man. Thanks to it there will be no need to include every single member in municipal assembly each time when there will be need to make an important decision      by the Mayor and plenipotentiaries, who will not be able to decide without the presence of the commission, which will watch over the common good. Municipality was split into three circuses, from which one of its two members were chosen to join the commission: (I) Jan Zagożdżon and Ludwik Grzybowski, (II) Adam Borowiecki and Albin Kuklińsnki, (III) Franciszek Kaczyński and Józef Aksamitowski. Commission members were to hold the office until their removal by municipal meeting. The gathering was notified that due to the urgent need mayor with plenipotentiaries selected 5 militiamans, the case of their salary was moved to the next meeting, although it was proposed to finance the part of it from the fund created with the money from penalties for citizens who left the meeting without signing the protocol – 5 crowns per person.

In the light of the documents we can assume that, November 6th was the day when Zwoleń regained its independence. The authorities decision, which were carefully observing nationwide events, is not surprising, they acknowledged  previous provisions as non-former anymore and carried out new resolutions, aimed to consolidate native authority in reborning Poland. 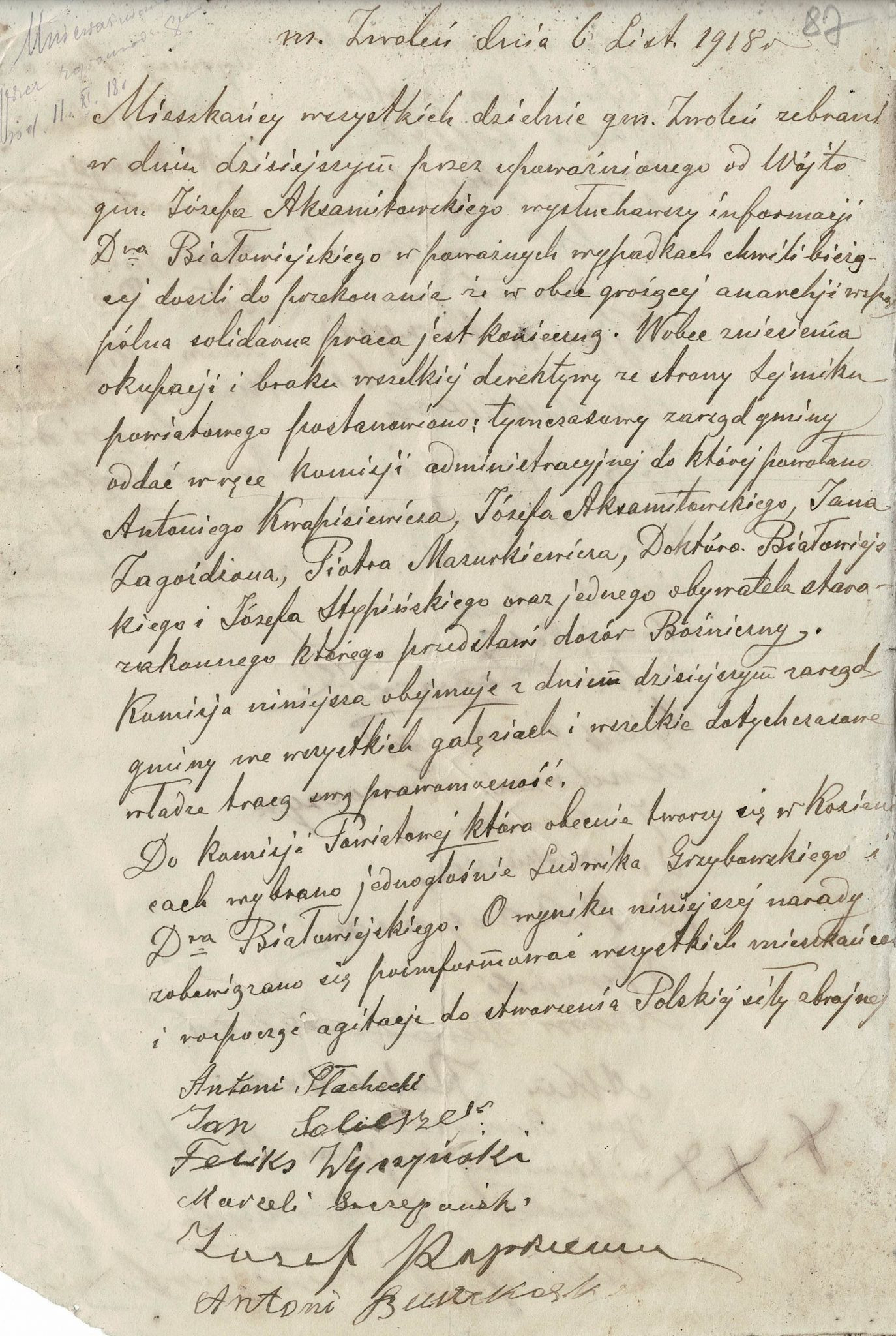