“Peasant from the Zielonka Nowa village”, that is how he was described by Ilustrowany Kurier Codzienny’s journalist, but he visited Franz Josef himself. Humble host, at the same time affected by the motherland’s faith. Autodidact sculptor which doings could put a man into a state of amazement. What else can be told about Wincenty Flak?

He was born 25th march in 1870 in Nowa Wieś, in a large family of Antoni Flak and Agnieszka from Żaki. He had three siblings – two brothers and one sister. In 1886 Flak family moved to Zielonka Nowa. Sixteen years old Wincenty lived with his parents until he finished education and started his own family.

In 1895 he married Marianna Oczkowska, and one year later she gave a birth to their son Feliks. His first wedlock was broke by the death of his beloved wife. In 1903 he got married again. His second spouse was miss Milarczyk, from Zawada. She also gave a birth only to one girl in 1904 who was named Katarzyna. At this particular time was working on the land was the only income of the family, but Wincenty was an active member of local music group. He was playing on handmade violin, mostly at weddings and other kinds of celebrations. In his free time though he was indulging in sculpting. His first serious doing was made in 1905, it was a ornamented crucifix for his father’s grave. For a father who did not let him to waste time “playing around with wood”, talent of his son was more like a trouble for him than something that could make him proud… Who knows, maybe it was the gift which could give Antioni happiness.

A year after the father he was abandonned his second wife did the same thing. Two years later in 1908 he married his third and last wife – Wiktoria Nowak from Samowoda village. Wiktoria has born four kids – sons Józef (1908) and Władysław (1916) and daughters Antonina (1913) and Adela (1919).

Back then he was only into sculpting. There were two main things which were inspiring him – nature and belief. His first doings were most sculptures of saints and relievos depicting passions scenes, richly ornamented frames, flowers and other floral themed doings. In 1912 his art was exposed at collective exhibition in Kozienice. Later they were exposed also in Radom, Dęblin, Staszów and Poznań. After that there came time for his first award for “Zagroda Wiejska”.

In 1913 Wincenty Flak decided to create a relievo of Crucified Christ, which he wanted to present to pope Pius X. Unfortunately he was unable to do that. Opus, which dimensions were 2×2 meters, priced at 14 thousand rubles was destroyed in 1914 when tsarist army were falling back from the territory of Poland. At the same time Flak was working on gifts for Austrian Emperor Franz Josef. He made an ornate throne and a crown with likenesses of Franz Josef himself and his wife Elisabeth. Most likely Wincenty and his wife Wiktoria presented those gitfs for emperor personally in Vienna. As an expression of appreciation and gratitude emperor bestowed Wiktoria with precious brooch, and Wincenty with golden watch studded with diamonds. He also offerd him a workshop in Vienna, but Wincenty declined. It could have changed his whole life, maybe his name would be known worldwide, but it was not the thing Wincenty wanted, he wanted his homeland to be finally free…

He was planning to celebrate the regain of independece of Poland with a special, monumental doing (dimensions 4×3 meters) “Resurrection of Poland”, depicting Poland being emancipated from all of the three invaders. The last thing he wantend to put on his masterpiece was a star, but he had to wait a long time in order to do that – particulary to the late 1930s. Due to really high cost of realization of his work he exposed it few times on an exhibitions before it was complete, he did it in order to gain the money which was needed to finalize “Resurrection of Poland”. In Dęblin it was admired by Ignacy Mościcki.

It was not the last time Wincenty had seen the President. In 1930, at the celebration of 400th Kochanowski’s birthday which was held in Czarnolas, Mościcki was endowed with “Tryptyk” (also called “Ołtarz ofiarowany prezydentowi Mościckiemu” – “The altar offered to president Mościcki”). That situation was described by “Ilustrowany Kurier Codzienny” Today [16th December] on a special audience Wincenty Flak – peasant form Zielonka Nowa village, Grabów commune, krzemieniecki County, is going to give President of The Republic of Poland a gift – sculpture. It was made with wood and placed in a case specially made for it. The sculpture is depicting polish emblem – The Eagle in frames with the liknesses of The President of The Republic of Poland and Marshal Piłsudski. Whole of that was mounted on a red background looking really strikingly. Editoral office also put a picture of the sculpture.

Five years later, in 1935, dedicated sculpture was also given to Józef Piłsudski. A big triptych, in which central part were two figures meant to be Marshal and two eagles with crowns on their heads. Whole doing was intricately decorated with military themed ornaments.

In 1938 the King of Romania – Carol II visited Poland. He was also bestowed by Wincenty but this time the casket was a gift. It was decorated similarly to the other doings – rich ornament with a polish emblem.

Patriotic doings became the hallmark of Wincenty. He was willingly sculpting the emblem of Poland, which was admired not only by the greatest personalities of Europe and Poland, but also the local offices and schools – for example the building of Kozienice council, private households of inter alia Stanisław Wieczorek form Melanów. Among the most used by the Flak elements which are the emblem of Poland, figures and portaits of politicians, ornamtents shaped like weapons and military decorations we can find sculpted inscriptions – quotes proclaiming the greatness of Poland. The fact that the doings were really big, underlines how importnat for artist theme of his doings was. It is astonishing that despite of the size and amount of elements used in Flak’s “altars” they are not crushing for the viewer, on the other hand they let the viewer sit for a while with a doing to analyze and contemplate about it.

From all of Wincenty’s works of art there is a numerous group of sacral themed ones – paintings, sculptures and feretories, one of them was made for the Church of Bernardine Fathers in Radom. One of the earliest doings, from 1918 is wooden cross made for Helena and Teofil Kawkas form Leokadiów, which dimensions are 414×130 cm, it is currently located in Nadwiślańskie Museum in Kazimierz Dolny, Castle in Janowiec departament. Wincenty was sculpting a second station of the Way of the Cross since 1927 to 1928, it lasted till today, and is located in parish church in Policzna. The fact that this sculpture is polychromed makes it extremely special.

While Wincenty was making religious themed sculptures the talent of one of his sons was discovered. A portable altrar, made in 1936 for Kółko Różańcowe w Zwoleniu was a cooperation between Józef and Wincenty – father made richly ornamented frame and a base of feretory, whereas son painted likeness of Mother of God, holding armful of flowers.

In his work Wincenty was not forgetting to give some of it to his family members. He believed polish traditions, and in 1907 he made for Wiktoria, fiancee at that moment, a beautifully decorated whorl. All the time he was giving handmade gifts to the people with who he was close. A memorable gift were three “Pietas” for each of his daughters – Katarzyna, Adela and Antonina.

He was really dedicated to sculpting, this job required a lot of focus and precision, at some point all of his efforts turned out to bring him various health problems. Despite his eyesight were not as good as it used to be he did not give up on sculpting. Finally he finished “Resurrection of Poland” which unfortunately did not make it till today. It was robbed from Flak’s house by the Nazis, while they were searching it.

However it was not the only incident that took place during World War II, which significantly damaged Wincenty’s creation and family life. His sons were arrested during the raid in Radom, same as his daughter Antonina a little after. Father seeking for a way to help his kids decided to create another triptych – but this time it was about to be nazi themed, he wanted to give it to General Governor Hans Frank. It had to be extremely painful to put swastikas on sculpture when you love your country as much as Wincenty did… He gave the sculpture to Hans Frank in Cracow and succeeded in his mission – Józef and Władysław were not transported to concentration camp and thanks to that both of them survived the war. Unfortunately Antonia’s faith was worse, she was transported to Ravensbrück.

These events had a massive impact on artist’s life. Not long after them he was diagnosed with pneumonia, which was the reason of his death. He died on 17th of June 1943 aged 73. At his funeral in Zwolen he was farewelled by his whole family, friends and local society.

Years of war fear, all of troubles and amnesia made Wincenty not to be heard of for a long time. Currently because of his granddaughter Barbara Jakubiec and grandson Marek Łuczyński and Regional Museum in Zwoleń – his silhouette once again is strarting to inspire, delight and amaze. His self esteem, and consciousness of his value and talent was incredible, which he considered as some kind of mission. There is no other way how we can call a simple man who was going out to meet presidents, kings, politicians and gifting all of them with his most precious gifts – outcome of his creativity, a little piece of himself. 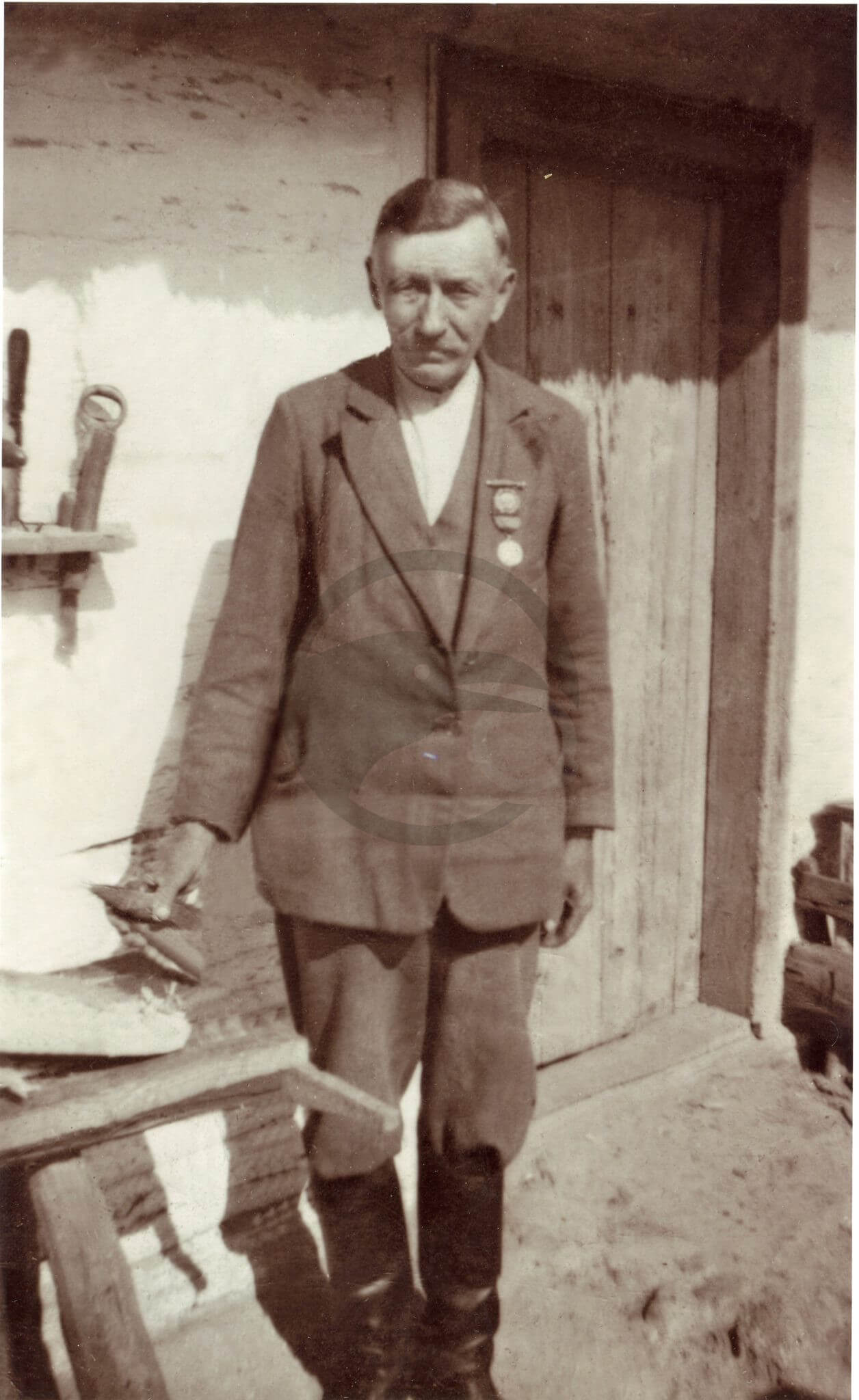